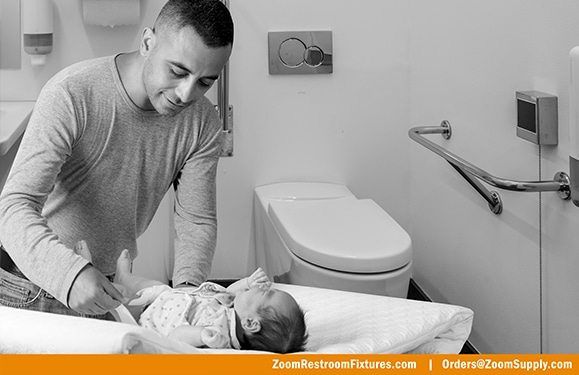 On January 9, 2018, NYC’s mayor, Bill de Blasio, signed a bill requiring newly built or renovated public restrooms to include baby changing tables for both men and women. This comes on the heels of the BABIES Act passed by President Obama in 2016 which had a similar mandate, except the requirement was for public federal buildings such as Social Security offices, courthouses, and post offices.

Although it seems that public changing tables have been around in women’s restrooms forever, they actually just recently emerged in the ’80s as mothers began to spend more time outside of the home. Now, however, that young Americans increasingly expect parenthood to be an equally divided endeavor, we are beginning to see a push towards men sharing in these diaper changing responsibilities, and that includes having the necessary facilities present.

In 2015, actor and investor Ashton Kutcher brought attention to the lack of baby changing tables. In a Facebook post, he complained, “There are NEVER diaper changing stations in mens public restrooms.” Thus, he started a Change.org petition calling for changing tables in men’s bathrooms in major retail stores. “Dads, like myself, want to participate equally in the child care process and our society should support that,” says Kutcher. To date, he has managed to get more than 100,000 signatures for the petition.

With celebrities like Ashton Kutcher and cities like NYC backing this movement, it will only be a matter of time before others begin to catch on to this trend.